As you can see from the photos, this was the job that had an MVHR system fitted in the new build property. The fact that we was not allowed to duct out the cooker hood created a few issues. The decision was reached to recycle the air/fumes from the hood and blow the air back into the room via twin 6″ vents at each end of the dropped down boxing.

You can see both of the vents in the pictures.

The kitchen itself was German with Integra handles and the main part of the kitchen is in Magnolia Gloss and the Island doors & Panels are a darker shade (although its not easy to tell from the pictures.

All the appliances are Siemens apart from the Ceiling Hood which is a Luxair Anzi with remote control.

Sink is by Blanco. Worktops were Angolan Black Granite. 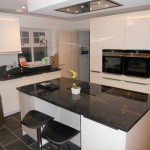 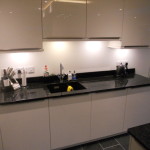 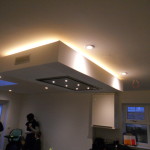 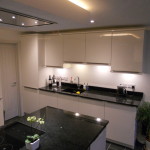 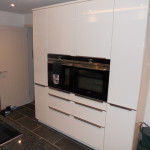 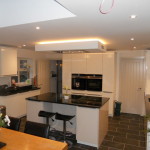 ‹ Back to News
Back to top